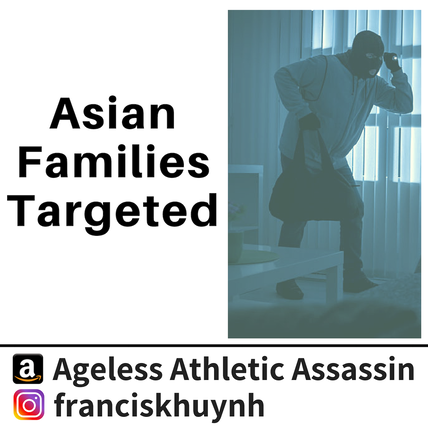 
Many Asian Americans experience racism in public by racists who are conditioning to view Asians as inferior perpetual foreigners by their parents, friends, media portrayal, celebrities, and all other forms of media that portray damaging Asian stereotypes.

Since 2016, the Sacramento Police Department said they sent out an alert via NextDoor warning South Sacramento residents of increases in armed robberies targeting Asians of which 400 homes have been victims. Police said several robberies happened while the victims were at home getting out of their car where the suspects were following them by car days before. The thieves’ assumption is that Asian victims don’t speak English so won’t fight back and won’t report to the police. Peter Chung described his horrifying experience saying “Two armed men kicked down the front door of my home and held me, my brother and my mother hostage at gunpoint. The men then forced us into a car to withdraw $8,000 from a bank.” 46-year-old Hua Cai Chen, who was shot in the calf and robbed of $700 in cash by two men as he exited his car, sadly says “Sacramento is too scary. I don’t know how to live now. I have a mortgage to pay, a wife and child to feed.” Sacramento residents such as Kent Tran says “I’m shocked. I’ve actually armed myself with weapons and stun guns, a surveillance system, and upped my security system with glass-break sensors.” Tom Phung, who has lived in Sacramento for over 35 years, says “We have nearly a dozen families who have moved out of Sacramento, even selling their house below cost just to get the hell out. In this neighborhood, there’s a gun pointed or fired almost every night. The police takes 40-50 minutes to arrive.” The community has organized a WeChat group of 500 members to report suspicious activities where members who speak English can translate the crime to police.

There have also been robberies targeting Asian communities in Philadelphia Pennsylvania where Ivan Zhou, whose father was robbed at gunpoint by three men, says “Our community has a lot of immigrants, individuals who don't speak native English. Everyday there's a new case.  Everyone is just crossing their fingers, hoping that it will just all end.” In 2017 for the crimes in Philadelphia, U.S. District Judge Petrese Tucker sentenced Tyree Mansell to 36 years and eight months in federal prison for a string of 2015 home-invasion robberies against Asians with the Judge saying “This defendant is a violent recidivist. The defendant has no respect for the law.”

Raleigh Asian business owners were also terrorized at their homes in 2018 when 22-year old Jun Wang, who owns three Chinese restaurants in the area, was robbed by three masked and gloved Spanish speaking men. Jun says his biggest lesson is “Close and lock the door first before turning off the home alarm system so that no one can sneak in undetected. Keep your cash in the bank and carry just plastic credit cards that can be cancelled.” In the same year owner of China Wok Hong Zheng was killed outside his home during a robbery in nearby Durham North Carolina. This saddened many in the North Carolina triangle community who knew Hong as a friend. In self-defense to protect their families, about 100 Asian business owners have banned together to form the North Carolina Chinese Hunting Club to train in shooting techniques once a month at the Wake County Firearms Education & Training Center with instructor Wei Miao.

Raleigh restaurant owner Lang Dong says “I don’t leave my home without strapping a 9mm semi-automatic Glock 17 pistol to my hip. My wife and I own seven guns: three pistols, one AR-15 and one shotgun in the restaurant as well as another pair at home. My wife keeps a pistol in her purse. If there's a car directly behind me on my way home, I'll keep going because don’t want to risk leading them to my family. I’ve also installed a steel-plated panic room in my house and instruct my children to bolt themselves behind the reinforced door in case of an attack.”

In addition to life-threatening armed robberies, Asian Americans are racially abused. In 2018 in Fremont California, a U.S. Air Force Reserve James Ahn was racially abused by a woman who stated that James wasn't driving fast enough when he was driving at the legal speed limit. In the viral Facebook video, the woman said to James “This is not your f-ing country, this is my country. Go back to f--ing China, you ugly Chinese” while making a derogatory slanted eyes gesture. Angered U.S. Representative Eric Swalwell tweeted “I proudly represent #Fremont in Congress. This woman does not represent Fremont, which is a diverse, inclusive community. But she’s a reminder of the hate that still exists in America and the work we all have ahead. Thank you, James Ahn, for your service to America.”
​
In 2017, 21-year-old Vietnamese college male Henry Nguyen was enjoying time with his girlfriend at the OC Night Market until a white couple punched Henry in the face while yelling “Go back to Asia. Go eat Dog!” for Henry refusing to let the white couple cut a long line everyone else was patiently waiting in. When Henry and his girlfriend left the market at 11PM, the White couple had been stalking them all day so pulled up next to Henry’s car to break his teeth and bloody his face before speeding away. Stunned, Henry said “I was just thinking, all this could’ve been avoided if they just got in line. She didn’t have to be racist.” Saddened to see the racism, OC Night Market organizer said “Our event is a platform that celebrates diversity and all cultures in our community and every event draws a more diverse crowd. We are happy the victims are on their way to recovery and hope that law enforcement will be able to sort this out.” His girlfriend raised $6,413 on GoFundMe to pay for his emergency room visit and dental work on his teeth.
© 2016 JustHuynh Inc. All rights reserved  |  Terms of Use  |  Privacy Policy