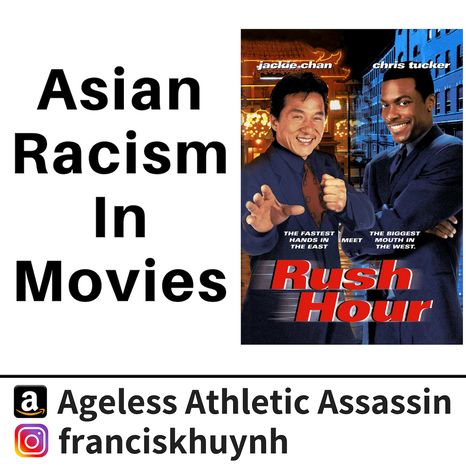 
Hollywood and the media have the biggest influences on how Asian Americans are treated in the United States as family’s perceptions are shaped by what they “see” at the movie theatres or on television and “hear” from the media or public gossip. From before I was born in 1988 to now in 2018, Asian men have been emasculated as weak, nerdy outcasts, and shy losers who can’t attract women whereas women are portrayed as people who speak broken English and are submissive to men.

With the capture of South Vietnam by the Communist North Vietnamese in 1975 after the United States pulled all soldiers out of the war, Hollywood capitalized on the war - producing numerous blockbuster $100 million films including “Platoon” in 1986 starring Charlie Sheen, “Full Metal Jacket” in 1987 starring Ronald Ermey as Sergeant Hartman, and “Good Morning, Vietnam” in 1987 starring Robin Williams as a radio DJ on Armed Forces Radio Service.

In“Full Metal Jacket,” there are two scenes that degrade Vietnamese women with the lines “me so horny...me love you long time...me sucky sucky” when a prostitute approached two American soldier for sex and “you boys want #1 f--ky? she give you everything you want, long time” when a pimp was negotiating the prostitute price with an army platoon. From these two scenes, many white men develop an “Asian fetish” towards Asian women with the hope of a submissive wife who will not talk back, cooks, and can fulfill their sexual desires at night.

American men continue to have the perception that Asian women are “easy to get” due to Asian nations historically pleasing American soldiers during wartime to prevent American soldiers from raping women living in occupied territories at the end of World War II. In China after World War II, President Chiang Kai-shek encouraged 54,000 U.S. marines to stay by opening 450 cafes, dance clubs, and restaurants near the military bases where Marine Lt. Carl Johnson wrote a letter to his wife describing Tianjin as “The village itself consists of about thirty bars and cafes. Each one is a house of prostitution and there is nothing undercover about it.” After the United States occupied Japan in 1945, Japanese officials created the “Recreation and Amusement Association (RAA)” to provide “comfort facilities” in preventing rape by American troops because an estimated 10,000 women were raped by Allied military troops in Okinawa Japan during World War II.  RAA Chief of Public Relation Seiichi Kaburagi said “Over 4 months, there were 70,000 Japanese prostitutes serving 350,000 U.S. troops in Japan. 1 Japanese women had sex with 47 American troops each day for $2 USD total.” U.S. General Douglas MacArthur shut down the brothels in 1946 amid complaints from military chaplains about the “R&R Rest & Recreation or I&I Intoxication & Intercourse” offerings. In South Korea during the 1960s, South Korean President Park Chung-hee created “prostitution towns” where over 350,000 women served U.S. troops that accounted for 25% of South Korea’s GNP.

Personally, my grade school classmates would make fun of my small eyes by “pulling their eyes back” and say “you sucky sucky” - bullying me for my broken English, shy personality, and weak physique. Students would ask what my mom was making for dinner saying “hey Ching Chong, your momma making chicken fried rice tonight?!” During recess I was never picked to play soccer with bullies saying “American doesn’t want you here, go back to Vietnam and work in a Nike sweatshop.”

In “Good Morning, Vietnam,” U.S. Army radio host Robin Williams on one of his segments said “What is a demilitarized zone? It sounds like something out of the Wizard of Oz...Oh look you’ve landed in Saigon, you’re among the little people now.” This is yet another example of discrimination against Asian men for being short which leads to women not even wanting to consider dating Asian men, sports scouts not paying attention to Asian athletes, Hollywood not casting Asians in lead roles, and corporate America excluding Asians from leadership opportunities because Asians don’t fit the “tall white men” demographic.

From 1998-2007, which was when I was ages 10-19 going thru middle school and high school, Jackie Chan collaborated with Chris Tucker in the “Rush Hour” trilogy. Jackie Chan tried to carry on Bruce Lee’s action movie legacy by collaborating with non-Asian actors such as Bruce Lee did with white martial artist Chuck Norris in “Way of the Dragon” in 1972, black martial artist Jim Kelly in “Enter the Dragon” in 1973, and black basketball star Kareem Abdul-Jabbar in “Game of Death” in 1978. Similarly in America, Jackie Chan helped propel the career of black actor Chris Tucker in the “Rush Hour” trilogy where Chris Tucker made $25 million + 20% of box office sales ($258 million box office) in “Rush Hour 3.”  And Jackie Chan also launched the career of white actor Owen Wilson in the first of three movies together called “Shanghai Noon” in 2000 that helped Owen star in movies “Zoolander,” “Behind Enemy Lines, “Wedding Crashers,” and “Cars 3.”

In “Rush Hour 1” when Chris Tucker meets Jackie Chan for the first time at the airport he says “Please tell me you speak English, I’m Detective Carter...Do you understand the words that are coming out of my mouth! I cannot believe this s**t! First I get a bulls**t assignment. Now Mr. Rice-a-roni. Don’t even speak American.” This scene captures how Asian Americans who speak broken English or don’t want to engage with racist people get treated in America.

In “Rush Hour 2” when speaking with black actor Don Cheadle, Chris Tucker says “You’re embarrassing yourself, you’re a black man with a Chinese restaurant...alright uc-taw it-ah oop-ta oom-ski.”  When I travelled to New Orleans with my wife, many black men kept asking if I was “blackinese” in exact reference to this scene.

In “Rush Hour 3” when Chris Tucker catches up with Jackie Chan, Chris says “That’s right Lee. For the last 3 years I have studied the ancient teaching of Buddha - earning 2 black belts in Wushu martial arts...I am half Chinese baby.” Nelson Mandela said we should treat all people with respect instead of engaging in cultural appropriation.

Two years after “Rush Hour 3” came “The Hangover” trilogy from 2009-2013, while I was ages 21-24, featuring Asian American Ken Jeong as Leslie Chow. Ken was portrayed speaking with a broken English accent, weak, small penis, short, and small eyes. Hollywood did not portray Leslie Chow in a positive hero-like role that can inspire men to be strong and sexy.
​
In 2014, 1 year later and 2 years after the Facebook IPO, Hollywood produced a TV show called  “Silicon Valley” with an Asian character named Jian-Yang played by Jimmy O. Yang. Jian-Yang is portrayed as someone who speaks broken English, is nerdy, and can never attract women due to his awkwardness and weak physique.  People who follow the show especially women tend to assume that Asian men are not physically and socially attractive.
© 2016 JustHuynh Inc. All rights reserved  |  Terms of Use  |  Privacy Policy