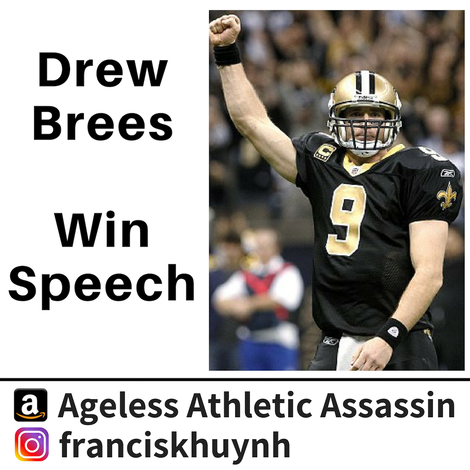 In athletics, you are often training to be a “better you” in order to get personal records in a challenge or win a championship with a team.  Football is one of the best team sports involving 53 players where the ability to lead a team can translate into leading a business with a similar amount of employees. In 2010, New Orleans Saints Quarterback Drew Brees was hailed as a hero for winning the city’s first Super Bowl which had tremendous meaning as it was still suffering from Hurricane Katrina in 2005. Drew Brees came to the rescue again in delivering a “Lethal” pre-game speech during the 2019 NFL NFC Divisional Playoff game against the defending Super Bowl Champion Philadelphia Eagles that resulted in the Saints winning.  Channel this energy every time you exercise or compete.
​
“Hey listen to me now. There’s three stages to this game. You play, you compete, and you’re lethal. When you’re a kid, you play. You play because you love this game. Then you started learning fundamentals. You started learning technique. You started learning how to compete and how to win. Then the third stage - not everybody gets to the third stage. Not everybody gets to be lethal. But when you get a group of guys that love one another and plays for one another - that’s lethal. When you go into every game and find a way to win no matter the circumstance - that’s lethal. All season long we played, we competed, and tonight - we are lethal! Let’s go baby. Win on three - 1,2,3 - WIN!”
© 2016 JustHuynh Inc. All rights reserved  |  Terms of Use  |  Privacy Policy