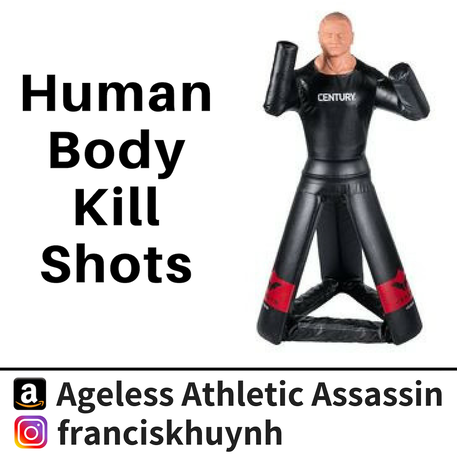 In the streets when you need to defend yourself, you typically need to be able to defeat your opponent in under 30 seconds or be able to outrun them within 100 seconds to get to safety. According to the FBI’s 2017 Crime Clock in the United States, a violent crime occurs every 24.6 seconds, one murder every 30.5 minutes, one rape every 3.9 minutes, one robbery every 1.7 minutes, and one aggravated assault every 39 seconds so it’s extremely important you can run, hide, or defend yourself.

Similar to Bruce Lee being able to knock out opponents with his “One Inch Punch,” military snipers adopt a “One Shot, One Kill” philosophy by being efficient in taking down a threat in as little time and energy spent as possible. In a life threatening situation, your knowledge of the human anatomy will allow you to take down the threat quickly so you can escape danger. Below are parts of the body (top to bottom) that you can practice with a padded person, dummy, or shadow boxing to defend yourself. These parts of the body have been identified as pressure points in acupuncture that will bring pain to the attacker. We live in an age where anyone can attack us in public including people you know so you must be ready to defend at all times. Use your judgment on which body parts to strike based on the threat level.

For fighting stance, you want to have a compact stance with feet directly under your shoulder where you are loose and relaxed yet springy and coiled. Keep your rear heel raised so can react like a coiled spring for kicks, punches, dodges, blocks, and other moves. For efficiency, use your hands for upper body targets and legs for lower body targets.
In practice, use a peripheral vision drill where you don't concentrate too hard on one area of the opponent but instead look at the center of opponent’s body so you have peripheral vision of their entire body. Speedy reaction time involves understanding your opponent’s intent of attack, retreat, punch, or kick that triggers you to evade, block, intercept, or counter. Through practice, you’ll be able to relay your opponent’s stimulus to your brain that triggers your self defense. You also need to be able to strike and adjust quickly in case the opponent sets you up for a counter.

Center of skull on top of head: you can break opponent’s skull once they are on the ground. If you watch Hong Kong movies featuring Bak Mei, one of the five legendary Shaolin elders, opponents try to attack his groin as its perceived to be his “weak spot.” When they fail, Bak Mei always kills them with the downward palm strike to the center of their skull. You can also use a flying downward elbow strike.

Temple: a strong punch to a soft temple can knock someone unconscious. You can strike with elbows, knuckle punches, and palm strikes.

Eyes: gouging an attacker in the eyes is a last resort as it can permanently damage an attacker’s vision. You can use a finger jab where you tuck your long fingers to match length of pinky and tuck thumb in to form a spear. Thrust your fingers forward without retraction like a snake.

Nose: it only takes seven pounds of pressure to break a nose. Use an upward palm strike that hits bottom of the nose.

Jaw hinge: knocking someone just below the ear can break their jaw and knock them out. Your hand might get hurt as you don’t have gloves like a boxer so use your palm or elbows.

Chin: striking someone on the chin can knock someone out because it forces the head to twist and rattle the brain. You can do upward palm strike, upward elbow, or flying knee strike. You can see when Jackie Chan finishes Benny Urquidez with a flying knee strike to the chin in “Wheels on Meals.”

Base of skull/neck: hitting someone at the base of the skull can cause spinal cord injuries. You can strike with the bottom of your fist or use an inward elbow.

Side of neck: striking the carotid artery can cause severe dizziness. This can be executed with an open-hand karate chop.

Base of throat: a light punch to the throat can cause someone to choke. You can use a palm strike or punch. In “Mission: Impossible - Fallout,” Liang Yang causes Henry Cavill to lose his breathe in the famous bathroom fight scene with Tom Cruise. Liang overpowered both men and was only defeated by getting shot.

Clavicle: this is a pressure point that can be pressed down on from behind an attacker.

Solar plexus: a strong kick or punch to the solar plexus will easily knock the wind out of someone.

Wrist: this is a pressure point where you can break an attacker’s wrist by twisting the wrist outwards to drop them.

Central area of the forearm: located 5 inches before the wrist, you can intercept a punch and apply pressure on the tendons.

Behind elbow: this is the location of the funny bone that can be struck with counter elbow or punch. In the movie “Kill Zone 2,” Wu Jing decapitates Zhang Chi by twisting his wrist then snapping his elbow.

Biceps: attacker will be unable to move arm if you hit their biceps so you can use this time to perform a rear naked choke hold. In “IP Man 2,” Donnie Yen defeats Twister by elbow striking Twister’s biceps.

Fists: when an attacker throws a jab or reverse punch, you can counter with an elbow strike that intercepts their punch. If your elbow is well conditioned, you could break the attacker’s hand.

Bottom of rib cage: causes serious lesions to chest and internal organs. You can use a body shot punch or knees. You can see this being carried out by Mad Dog when he fights against Rama (Iko Uwais) and Andi in the movie “The Raid Redemption.”

Liver: a strike to the right side of the rib cage can incapacitate a person. You can use a left roundhouse kick or left body punch.

Tailbone: a strong strike can send pain to rear end, lower back, and legs. You can perform a front kick.

Groin: if someone is coming at you from the front, a groin kick may deliver enough force to paralyze your attacker. In the movie “The Protectors” final fight scene, Tony Jaa escapes from a choke hold against Nathan Jones by punching Nathan in the groin.

Side of quads: located 5 inches above the knee can cause great pain. You can strike with roundhouse kick.

Center of quad: you can cause pain with a front kick or side-kick.

Knees: kicking someone’s knee to the side can cause a tear that will disable any attacker. You can perform an outside to inwards roundhouse kick. Chen Zhen (Jet Li) finishes General Fujita with a knee strike in the “Fist of Legend” movie.

Ankle: there are pressure points on inside and outside of ankle that can be hit with leg sweep. Near the end of fight between Bruce Lee and Chuck Norris in “Way of the Dragon” movie, Bruce weakens Chuck with a leg sweep causing Chuck to fall.
​
Big toe: you can stomp on attacker’s big toe if they are grabbing you from behind.
© 2016 JustHuynh Inc. All rights reserved  |  Terms of Use  |  Privacy Policy