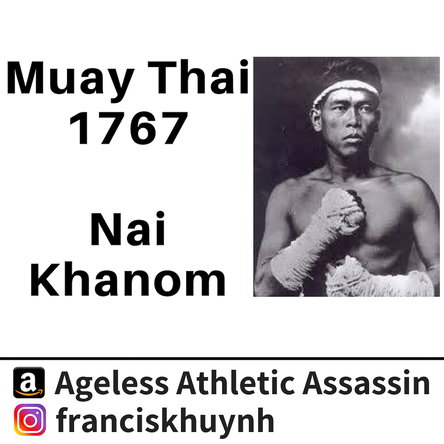 At age 43, actor Idris Elba trained 12 months for 1 professional Muay Thai fight in his documentary “Idris Elba: Fighter.” Idris said his motivation for training was “It was part of being a man. Facing up to another man is the ultimate test. Are you going to back down or are you going to face the fear? Everyone thinks they’re hard. When push comes to shove, what are you going to do? Do you have the physical and mental strength to protect yourself?”

In 1238, the first Thai army was created in the northern city of Sukhothai to protect the government and its people. With constant threat of war, men practiced Muay Thai for self-defense, exercise, and discipline. Muay Thai became popular where high-class and royalty were required to practice Muay Thai as good warriors made brave leaders.
​
In 1767, Thailand was ransacked by Lord Mangra’s Burmese army. To celebrate the Burmese victory, Lord Mangra threw a festival ordering Thai prisoners to fight the best Burmese fighters. Nai Khanom Tom “Father of Muay Thai” defeated 10 consecutive elite Burmese fighters. Impressed, Lord Mangra said to Nai “Every part of the Siamese is blessed with venom. Even with his bare hands, he can defeat ten opponents. But his Lord was incompetent and lost the country to the enemy” and rewarded Nai freedom and Burmese women as wives.  Nai Khanom Tom returned to Thailand as a hero and spent the rest of his life teaching Muay Thai. Nai is remembered every year on March 17 as the greatest Muay Thai fighter in history.
© 2016 JustHuynh Inc. All rights reserved  |  Terms of Use  |  Privacy Policy