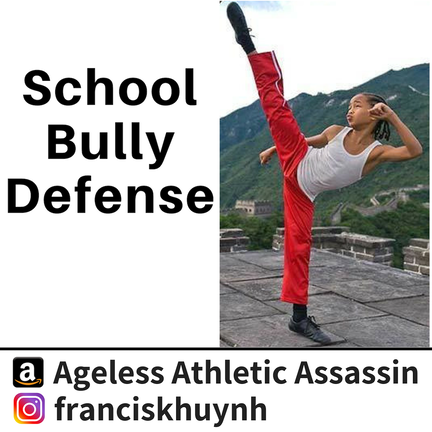 
Kindergarten thru 12th grade are important years of a child’s life but bullying gets in the way of a safe school environment.  A 2009 Zaidi study published in the Archives of General Psychiatry following 5,000 children in Finland found that boys and girls who get bullied were more likely than their peers to require psychiatric treatment in their teens or early 20s.
Hong Kong schools take anti-bullying seriously where children as young as age seven learn self defense.  Eight-year-old Tallie Lin from a Hong Kong School says “You have to learn to protect yourself in case you are kidnapped or someone tries to kill you with punches, kicks, chokes, knives, guns, or a kidnap attempt.”

School shootings are a major problem in the United States. The most tragic incidents were in 2012 when a gunman killed 20 children, six adults, and himself at Sandy Hook Elementary School in Connecticut; and in 2018 when a gunman killed 17 people at Marjory Stoneman Douglas (MSD) High School in Parkland, Florida. Per gun control advocacy organization “Everytown For Gun Safety,” there have been 300 school shootings in the United States from 2013 - 2019 or about 1 school shooting per week.

Many States and local municipalities have passed law allowing teachers to arm themselves. The best case scenario is for a school resource officer to take down an active shooter such as Dixon Public Schools police Officer Mark Dallas did in 2018 when he was honored as the “International Association of Chiefs of Police” Officer of the Year by President Donald Trump for saving his son and 182 classmates from an active shooter.  However not all school resource officers fulfill their duty of protecting their school community’s lives such as MSD Officer Scot Peterson who stayed outside instead of going inside the school to kill the gunman. In an interview with “Today” after Officer Peterson was forced to retire, Peterson said “I'm sorry.” When resource officers fail to protect lives of the school community or resource officers get killed in action, the standard “Code Red” protocol for schools is to hide in a locked classroom with the lights turn off until police arrive. This strategy of “hiding” while waiting for police makes school’s vulnerable to being killed by shooters since no one is in self defense mode to take down the attacker as a group.

Theodore Roosevelt once said, “In any moment of decision…the best thing you can do is the right thing, the next best thing is the wrong thing, and the worst thing you can do is nothing.” The right thing to do in order to stay alive, is to use self defense with armed teachers or self defense via group attack or else everyone risks being killed before the police even come. Skeptical of a resource officer’s commitment to protecting students, the Clarkesville School District in Arkansas told their community “arming teachers is more cost-effective to improving school safety than hiring a school resource officer. Instead of spending $50,000 a year on one school resource officer, we can train 13 school teachers to use a gun for $68,000 total.”

According to a 2006 study from the American Academy of Pediatrics, 43% of school superintendents don’t have a prevention plan for mass-shooting events and 33% have never conducted a mass shooting drill.
​
Many schools in the United States that do have mass shooting drills have training methods for high school age and below-high school age. For below-high school where students are generally younger than 15 years old, young kids can practice spreading out to throw classroom objects such as heavy textbooks at the shooter to knock them out.  High school age children can tackle the shooter with their collective force.
© 2016 JustHuynh Inc. All rights reserved  |  Terms of Use  |  Privacy Policy