Stay Fit In Your 40s 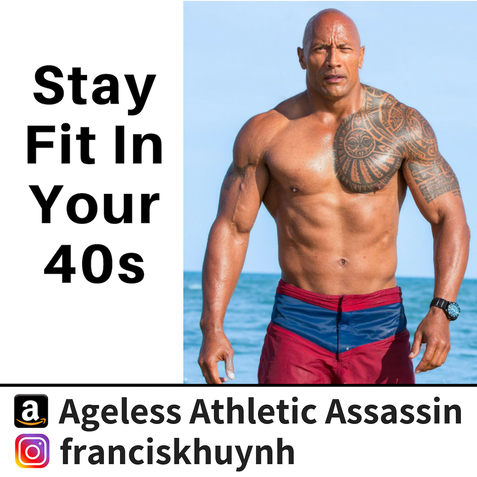 At Age 46, Dwayne Johnson is one of the best athlete to Hollywood success stories being known as “the People’s Champion” in wrestling to “the Rock” as an A-list Hollywood actor. In 2017, Forbes named Dwayne the highest paid actor in the world - earning $124 million for the year which was the largest ever recorded on the Forbes celebrity list. Dwyane is known for his chiseled chest and bulging biceps.

As one of the most successful Hollywood actors out there, organizations such as the Los Angeles Lakers bring in Dwayne Johnson to inspire their millionaire young basketball players to not take their playing days for granted because athletes will no longer be elite when their age reaches mid-thirties similar to Dwayne Johnson in wrestling who successful pivoted to acting. Even though Dwayne is wealthy, he stays hungry by reminding himself of all the “hard times” that got him to where he is today. He imagines that his back is against a wall so that the only direction he can go is forward in life. He remembers people doubting him saying he couldn’t do this and that but proved everyone wrong. In business, Dwayne always trains his mind to play chess when others are playing checkers in order to win.
​
At age 41, Dana Torres became the oldest swimmer to compete in the Olympics when she raced at the 2008 Beijing Summer Games. Dana’s motto has always been “Age is just a number.” Her favorite workout is boxing with the goal to be sore after every workout because she doesn’t want anything to be easy.
© 2016 JustHuynh Inc. All rights reserved  |  Terms of Use  |  Privacy Policy