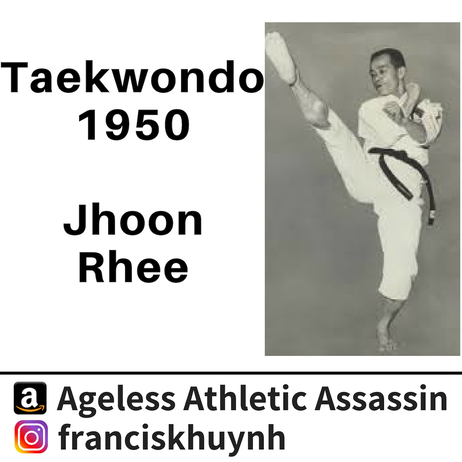 Beginning in 1945 after the end of World War II, new martial arts schools called kwans opened in Seoul by Korean martial artists with experience in Japanese, Chinese and Korean martial arts. A heavy emphasis was placed on kicking as using legs in combat gave them an edge over fighting styles that focus on punching. Taekwondo became popular with civilians when the South Korean military used Taekwondo in their martial arts training.

Born in 1932 during the Japanese occupation of Korea, Jhoon broke his thigh bone at age 3 when he was accidentally dropped by his 7-year-old sister. Because of the accident, Rhee’s family believed he would never be athletic. Jhoon says “I was the smallest, weakest, most uncoordinated kid in school...when I was 6, a 5-year-old girl beat me up...I was always last in track races.”  Determined to prove critics wrong about his size and speed, he wanted to learn martial arts but couldn’t as Japanese colonial rule banned all martial arts practices similar to what happened with Karate’s ban. Fortunately at age 13 in year 1945, Korea gained independence from Japanese rule so the ban on martial arts teaching was lifted - allowing Jhoon to study with Grandmaster Won Kook Lee in Seoul 2 years later at age 15.

In a self-defense fight against a bully in the 11th grade in front of his classmates, Jhoon countered the bully’s punch by punching the boy in the eye and kicking him in the throat. The “stand up to the bully” fight garnered respect for Jhoon as a confident person despite his small size.

Inspired by American soldiers who helped push the North Korean communists out of South Korea, Jhoon wanted to repay his gratitude with a military stint in America and then was sponsored by an elderly couple to stay in the United States. Jhoon says “America has really helped Korea, and I am so grateful for this...more than 34,000 young Americans sacrificed their lives for a country they never heard of and people they never met...then the Americans helped rebuild Korea’s economy into what it is today.”
​
In 1962 at age 30, Jhoon opened his first Taekwondo studio in Washington D.C. using marketing tactics such as writing letters to ambassadors serving in D.C. stressing Taekwondo can help their children achieve A’s and B’s in school, running ads in the sports section of the Washington Post, and producing a TV commercial ad featuring his daughter saying the anti-bullying slogan “Nobody Bothers Me” followed by his son saying “Nobody bothers me, either.”

In 1964, Jhoon met Bruce Lee at a martial arts tournament in Long Beach, California where the two became great friends with Bruce Lee teaching Jhoon his most powerful move “the one-inch punch” and Jhoon showing Bruce flashy powerful kicks. Wanting to show Taekwondo to the world similar to Bruce Lee did with Chinese martial arts, Bruce helped Jhoon in 1972 with a Taekwondo movie starring Jhoon. Unfortunately, Bruce Lee died before the release of Jhoon’s movie. Heartbroken, Jhoon said “I mourned not only the loss of my friend, but the loss to the world of martial arts as Bruce would have continued to make invaluable contributions to the philosophy so I was satisfied when I passed on Bruce Lee’s legacy to Muhammad Ali - teaching him the “Accupunch” to defeat Joe Frazier and Richard Dunn.”

Jhoon’s goal was to live until 136 like a supercentenarian but he passed away in year 2018 at age 86.  At his funeral, U.S. Representative Nick Smith praised Jhoon’s teachings as “a philosophy grounded in the principles of the martial arts, but applicable to everyone. It calls for people to build confidence through knowledge in the mind, honesty in the heart, and strength in the body, and then to lead by example.”
​
Today, all Taekwondo practitioners abide by Choi Hong Hi’s five tenets of: I shall observe the tenets (courtesy, integrity, perseverance, self-control, indomitable spirit) of taekwondo, I shall respect the instructor and seniors, I shall never misuse taekwondo, I shall be a champion of freedom and justice, I shall build a more peaceful world.
© 2016 JustHuynh Inc. All rights reserved  |  Terms of Use  |  Privacy Policy