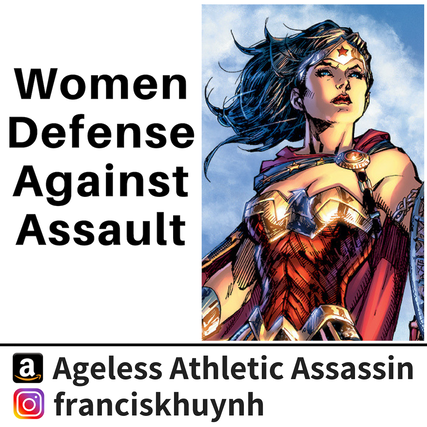 
Larger and stronger men often target women in sexual assaults such as rape assuming women can’t defend themselves. Judo founder Kano Jigoro inspired United Kingdom women in 1910 who were physically beaten by police and men. By studying martial arts such as judo, woman who had average height of 4 ft 11 inches were able to defend themselves against men who had average height of 5 ft 10 inches. Female Shaolin Five Elder legend Ng Mui, who's Wing Chun fighting style has been passed down to Bruce Lee and Bruce’s master Ip man, is most famous for teaching a 15-year old Chinese girl from being kidnapped.

In 2019, a women from Charlotte North Carolina, is forever grateful for martial arts when she ran into a karate dojo to escape a large 47-year-old black man from kidnapping her at 9PM. When the kidnapper tried to push by the karate master Randall Ephraim inside the studio in order to kidnap the women, the karate master used self defense saying “I then went into action defending myself and got him out of the dojo. Once outside he attempted to attack again and was dealt with accordingly.” When the police arrived, the kidnapper was carried out of the dojo on a stretcher in pain. The woman and city lauded the karate master a “hero” for protecting the woman.

Women between the ages of 15 and 30 are most susceptible to date rape, muggings, kidnapping, and other assaults when they are out late at night especially if the night venue is located in unsafe areas. The Centers for Disease and Control and Prevention conducted a “National Intimate Partner and Sexual Violence Survey” in 2012 revealing that one in four women will be assaulted in their lifetime.

A study, conducted by the New England Journal of Medicine lead author Charlene Sene, compared the effects of attending a four session course totalling 12 hours in resisting sexual assault to a university approach of providing brochures on sexual assault. 451 freshman women from Canada universities took sessions including recognizing potential sexual assault scenarios and two hours of self defense training in martial arts. The 442 other women were the control group that received a 15 minute sexual assault session with a take-home brochure. One year after the self defense vs the brochure training, 9.8% of the brochure attendants had been raped whereas the sexual assault participants had lower rape percentage of 5.2%. Thus lead investigator Charlene says “Sexual assault prevention programs cuts risk of rape by nearly 50%. It’s critical to give women the tools they need to fight back, however we also need to hold men accountable for sexual violence to cut down the number of sexual assault victims.”

In 2019 a would be mugger tried to sexually assault 115 pound Polyana Viana but chose the wrong person as Polyana knows self defense martial arts as a UFC Fighter. Polyana said “I knew how to defend myself.  He was really close to me. If it’s a gun, he won’t have time to draw it. I stood up. I threw two punches to his face and a kick. When he fell, I put him in a rear-naked choke. Then I sat him down to wait for the police.”

It’s very important to remember safety precautions such as not leaving a drink unattended or letting someone else get one for you, not walking alone, not walking distracted texting or talking on the phone, putting your car keys or sharp object between your fingers as a self-defense weapon, carrying an umbrella or belt as an extra self defense weapon, knowing where to kick and strike the attacker before running for safety.

For hand to hand self defense, the most efficient places to strike an attacker are the temple, eyes, jaw, nose, throat, neck, solar plexus, liver, ribs, groin, shins, knees, and feet. Practice these moves over and over again until your self defense reactions become natural: palm of the hand to the nose, hook punch or spinning hook kick to temple, finger to the eye, inside elbow to the jaw, punch to the throat, karate chop to neck, side kick to the solar plexus, left kick or left body punch to person’s right rib cage, roundhouse or knee the ribs, front kick to the groin, roundhouse kick to the knees, side kick the shins, and heel stomp on the foot. Unarmed skills are the first and last line of defense. If you lose your weapon such as your gun, knife, or stick in a fight, unarmed hand combat skills are what keeps you alive. That’s why the military forces train in unarmed close-quarters combat.

On the East Coast during the 1960s serial raper and killer named Albert DeSalvo known as the “Boston Strangler,” who was a former soldier in the army, targeted random single women across Massachusetts from age 19 to age 85. The Boston Strangler’s mode of operation was to gain entry into woman's home by saying he needed help for his broken car or that he was a detective before raping women and then killing them with the clothes they wore such as their belt and nylon stockings. Albert would leave all the raped and murdered victims on the floor fully naked with the strangulation item used placed around the woman’s neck in a bow-tie shape. In 2013, the Boston Strangler’s identity was finally solved after 50 years. The unsolved mystery inspired a 1968 Hollywood movie called “The Boston Strangler.”

Over on the West Coast in California, a serial rapist and killer known as the “Golden State Killer and East Area Rapist” named Joseph DeAngelo, who was a police officer, terrorized Sacramento California from 1975 to 1986 - raping 50 women and killing 13 women. Joseph targeted married women living in middle-class neighborhoods at night. Joseph performed research of the victims beforehand by peeping thru windows before entering homes unnoticed to unlock windows, unload guns, plant weapons for his later use, and call women to understand their daily routines. Finally in 2018, investigators used DNA evidence to arrest Joseph DeAngelo. Authorities said “The serial killer would monitor suburban neighborhoods and sneak into homes at night. If a couple was home, he would tie up the man, place dishes on his back and threaten to kill both victims if he heard the plates fall onto the floor while he raped the woman repeatedly for several hours.” Writer Michelle McNamara wrote a book about the search for the Golden State Killer called “I’ll Be Gone In The Dark” which will be produced into an HBO docuseries.
​
In 2015 in Melbourne Australia, 25-year old Taela Davis was enjoying an afternoon walk with her earphones in until she was attacked from behind and thrown on the ground by a 6 foot tall man with the intent to rape her. Fortunately, Taela’s black belt in karate helped her defend herself as she punched him in the face until he bled, kneed him in the ribs, and headbutted him - finally escaping when a male passerby came over that caused the bloody man to run away. Her Karate Master Ennio Ans was proud that his students used their training to escape a dangerous situation saying “When I test students for their black belts we have a survival test that involves the student being unexpectedly attacked by another club member with a black belt. They have 90 seconds to break free and get away. This training is what Taela used to escape a real-life attack.” Tracee Hall-Davis, Taela’s mom, is proud that she made both daughters take karate saying “I’d recommend martial arts for all women. It’s good to have the skills to defend yourself.”
© 2016 JustHuynh Inc. All rights reserved  |  Terms of Use  |  Privacy Policy